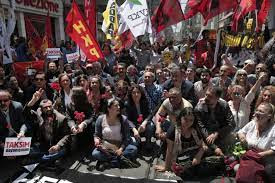 The Turkish Government has recently been increasingly forceful in its crackdowns against internal opposition. It has been working to eliminate the Peoples’ Democratic Party (HDP), which it accuses of being the political arm of the Kurdistan Workers’ Party (PKK), the Kurdish militant guerrilla movement, and Turkish President Erdogan’s main internal enemy. The Turkish Constitutional Court has recently handed down a decision to proceed with the banning of the HDP.

The government’s aggression against the third party in the country adds a new element to the political scenario of constant tension and fragmentation that can be seen both internally and externally. Various splits have taken place in recent years, which have given rise to political parties placed in opposition to President Erdogan’s party which dominates the political power in Turkey.

Despite all of this, banning the HDP will not be simple, particularly when they are a representative party with a strong electoral base in the community. It is still the beginning of a very complicated process. It is a political minefield to officially legitimise the wishes of Erdogan’s Justice and Development Party (AKP) through government actions, without creating a crisis in the foundations of democracy.

Particularly when President Erdogan recently declared in a speech about constitutional reform that Turkey will soon be the most democratic country in the region.

Over the years, Erdogan has worked hard to make Turkey a regional strategic centre, with an often aggressive foreign policy to position Turkey as a regional power, including the famous policy of “no problems with neighbours”. However, given the ever-fluctuating relations of Turkey with the European Union, the US, Russia and the neighbouring Arab countries, it might be more accurate to describe his approach as “problems with all neighbours and non-neighbuors”. Erdogan’s policies have not succeeded in fostering positive relations with partners or neighbours, actually, these policies had negative consequences domestically as it weakened Erdogan’s strongman image as the dynamics of internal politics are moving quickly and may soon lead to some changes as continued failure is unlikely to be defensible.

Given the shifting international politics, there is logic in efforts to create more favourable internal conditions for the government, particularly given that Turkey has begun to revise its rival relations with some regional players such as Saudi Arabia and Egypt. In fact, the situation remains extremely complicated and unstable, both from a political and economic point of view. This persistent instability can, over time, create serious internal risks that are difficult to manage. Various reports also highlight how Turkey has been experiencing a deepening human rights crisis over the past four years with a dramatic erosion of its rule of law and democracy framework. Thus, the official withdrawal of the Turkish government from an international treaty to prevent violence against women, can be seen just as another critical episode of the democratic backsliding in Turkey. The step provoked condemnation from many Turks and Western allies, still it didn’t prevent this decision announced by President Tayyip Erdogan in March 2021.

While it is difficult to imagine that Erdogan will be able to eliminate all his political antagonists without creating socio-political fragmentation, the potential instability will go beyond simple politics. It could easily lead to protests and aggressive demonstrations that degenerate into open violence. However, the adopted politics of the AKP against its opponents has often created this atmosphere, but when it comes to the involvement of official bodies, like the constitutional court, then anti-state sentiment could bleed into the protests. This creates the risk of internal terrorism targeting the symbols of the state.