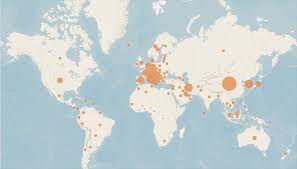 Since the end of WWII, the world has not faced a crisis like the one that COVID-19 has created. Several generations have grown up with the dominant concepts of globalisation, technology and living in a global village, where travel and communication is part of daily life. The impacts of the virus are being felt across all aspects of human life; from limited freedom of movement to access to staples. While humanity has the ability to cope with the imposed changes, the psychological effects are likely to be significant.

Physically, it is increasingly difficult to convince people to accept the limitations on movement as a result of the freedoms that generations have become accustomed to. While keeping people at home, they become increasingly aware through consumption of the dependency that most people have on others and the underlying system, as most people are not productive, or at least their productivity is focussed rather than broad and self-sufficient, so we need others and society in order to survive.
We have increasingly connected societies of consumers who have not encountered serious difficulty or challenge. These people are finding the current situation increasingly confronting, as they are facing the difficulties around sourcing essentials to survive. There is going to be a transition of mentality and capability in order to meet the new conditions, which is likely to include new obligations of social distancing. The physical distance requirements are pushing workers and families online to engage with their colleagues and loved ones virtually. We may see this level of virtual interaction remaining in our lives after the crisis is over, as people adjust to a new reality.
A global crisis such as the one we are seeing can have as much on an impact as crucial history changing events like world wars, with tremors and aftershocks that spread to every little part of daily life. The recent popularity of the ideology of economic pragmatism has come about a century after WWI. The prioritisation of the individual has caused issues with implementing limitations on individual freedoms for the community good, and has put pressure on international organisations, political unity and underlying structures. The economic crisis as a result of the health crisis will create a social, economic, security and political tsunami within countries. Collapsing economies can lead to social revolution, which invites terrorist and criminal groups to wreak havoc.
For Jordan, this crisis should be addressed with a Jordan-specific strategy. For the first time, we need to think locally in facing global problems. Jordan is nursing an already fragile economy, so it should think seriously about its own food security with small and local projects focussing on agriculture and food production. Maintaining the local cycle of sufficiency with the minimum level of loss is what Jordan needs to keep itself safe from both social protests and economic collapse. We should keep in mind that the level of individualism is high, which means we should not rely on any assistance or expecting rescue plans from allies. It is high time that Jordan applies its own survival strategy. The concentration of public policies should go to imposing new safety standards of life, as this crisis will reshape the world and how humans within it behave.
Dr. Amer Al Sabaileh

The new basis of ‘reglobalisation’

In the op-ed His Majesty King Abdullah had published in the Washington Post this week,…