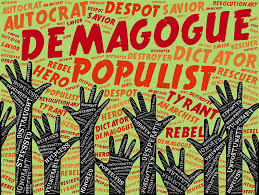 Comments Off on Politics in the era of populism

It is not accurate to limit the populist trends in politics to one country or region when in fact global democratic politics are driven by populism of one form or another. Being in a position of power in the modern world is not easy, regardless of the level of responsibility. The levels of expectation and anger levelled at the establishment have increased greatly in recent times, and in response, politicians and leaders find it much easier to be popular when they criticise governments and policies.
This trend has evolved so far that even bureaucrats and people from within the existing power bases are adopting the same approach, distinguishing themselves from the bureaucratic system they belong to. Given this, it is even more difficult as part of a political system that is not functioning properly. In a system that is not functioning well, populism is even more dangerous as politicians can attain power with a superficial approach to avoid criticism using nonsense statements and shallow tag lines that ignore the underlying structural issues.
The failure to produce economic or development outcomes in politics has seen many politicians take the same approach of spreading propaganda to compensate for their failures. Achievements cannot be achieved by slogans, videos or images alone. They may be effective ways to influence public opinion, but without actual results and outcomes this will not last. Real leaders focus on their achievements on the ground, and communicate those rather than empty campaigns on social media. If done right, improved services, economic growth, development of infrastructure, communities and outcomes are things that people live and breathe so they will understand these achievements.
When populists attain power, the expectations are higher and therefore, the resulting disappointment is greater. The risk is that after years of criticising and dismantling the bureaucracy that runs out countries, the populist agenda could create anarchy and chaos. It is creating a growing sense that the political classes are corrupt and dishonest and use the military and security establishment to maintain their power base. This model just fuels those who feel they have the right and the obligation to act to make change. Chaos is often fuelled by the sense that governments are inefficient and they do not have even the right to run people’s lives.
It is highly integral for decision makers to understand that current social trends are risky, and the only way to navigate them is to focus on achievements and concrete results rather than imaginary realities. While these methods may be efficient tools to temporarily increase the popularity of a leader in the short term, you cannot outrun the truth, it will always catch up with you eventually. This is not a sustainable approach when people continue to face inflation, a worsening economy, failing services, lack of development.
False realities will always catch up with you, what counts is results on the ground, and what makes a difference is what people live and not what they see or hear about. Change in how politics is played is necessary as is reform of the media but to be trusted and effective, it should all be based on truth.
Dr. Amer Al Sabaileh

How Qatar and Saudi Arabia would benefit from the Gulf reconciliation