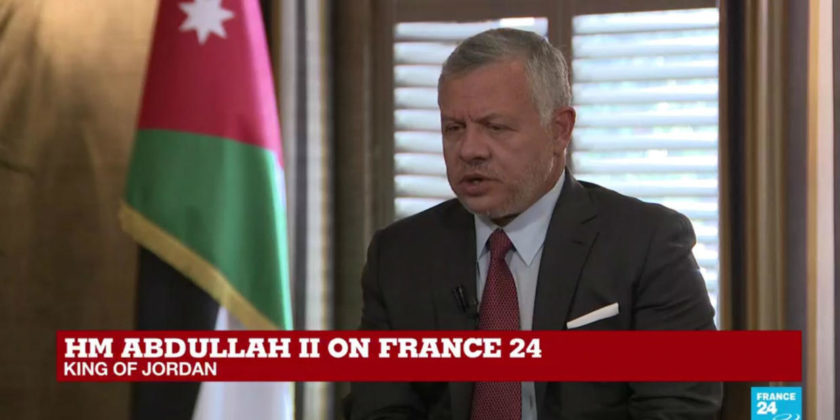 Comments Off on Realpolitik and the glass half-full
Things are moving very fast across the region, as tensions rise, protests spread and political turmoil dominates. As part of this, Jordan is facing many challenges internally and externally. Aside from the economic challenges and social discontent that it is facing, Jordan needs to adopt new strategies that deal it back into a more active role in the region’s dynamic. In developing a more effective strategy, Jordan should not rely just on its geography, but in finding a role that makes Jordan of strategic value for its neighbours and allies.
In his recent interview with France 24, His Majesty King Abdullah adopted a new approach of tackling the issue of the peace process, where there was no rejection of plans that are currently on the table and kept open the option of a solution in the future. His Majesty further discussed the need for a plan to move past the grey area that the issue has been in since the arrival of the Trump Administration in the US.
The steps taken by the Israeli government with overt US support do not inspire optimism on the surface. But a country like Jordan needs to be pragmatic about how important it is to be included in the decision-making process, and must ensure it is not excluded. Jordan, therefore, must adopt a flexible approach in order to be a protagonist rather than a bystander that is impacted, even if there are no benefits, or perhaps even if there are slightly negative impacts as a result of the approach. Jordan cannot afford to be perceived as a rival or be in opposition to the United States.
Being perceived as close to the US will always create more margin to influence policies and plans. It is critical to adopt an approach based on realpolitik in order to maximise Jordan’s influence and benefit, which requires a major role in the region. King Abdullah’s response to questions about American proposals will have an impact on Jordan’s ability to be an active player and facilitator of any plans that guarantee rights and stability for the region. King Abdullah said, “we need to have the plan unveiled for us to be able to see it from a point of view of the glass half-full”.
For a country like Jordan that finds itself in the middle of resolving conflict that requires reconciliation and reunion, it is imperative to play a key role in bringing Syria and Iraq back to stability. Similarly, it is extremely important for Jordan to play a central role with the Palestinians in order maximise future interest in the region. This can only be achieved with a complete overhaul of foreign policy and the political approach to Jordan’s neighbours. Jordan must take the initiative in order to cement a regional role as a facilitator and a position as a stable hub for resources and logistics.
This is the only way Jordan can maximise its utility, and, therefore, influence amongst allies and leverage the current situation to develop the economy. A more positive engagement with its neighbours is central to this approach, as well as with key allies internationally. In order for it to be effective, it also requires a change in personnel, as new faces are necessary to develop clean, new relationships based on trust.