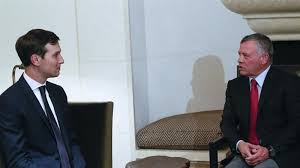 Comments Off on One step forward, two steps back
The possibility of agreement between the Palestinians and the Israelis is usually met with pessimistic sentiment. The practical possibilities to achieve the two-state solution are fading away and the Palestinian cause is no longer the centre of attention in the Middle East. Despite this, the crises across the region appear connected to the Palestinian issue, given the consequences around refugees, borders, security and normalisation of the relationship with Israel.
Nevertheless, it is now abundantly clear that the Trump administration in the US is actively seeking a practical approach to achieve Palestinian-Israeli peace. The latest step has been an attempt to break through any regional resistance by taking an economic approach at the recent Manama workshop. This has placed an enormous amount of pressure on the Palestinians to come to a consensus, which has in turn created political turmoil amongst Palestinians and some US allies who are concerned about the risk of not responding to the new American approach. At the same time, this American approach did not help even Netanyahu who is currently struggling to hold on to his position.
While there has been no official mention of Jordan being involved in the workshop or any settlement talks so far, there is clearly a logical obligation for Jordan to play a role in any vision for a lasting peace. The geopolitical reality of any sustainable settlement would require obviously more Jordanian involvement.
There is no doubt that Jordan has historically paid the highest price from the ongoing Palestinian crisis at all levels and it continues to face the same challenges pending a resolution of the peace process. However, any settlement based on improving the quality of life for the Palestinians would require a key role to be played by regional players such as Jordan, especially when it comes to border security and refugees.
In fact, the issue of refugees is likely to be the most challenging part of any possible solution as it could lead to conflict amongst regional groups involved.
The general consensus remains that a political solution is extremely difficult, but a more pragmatic approach that would materially improve the daily lives of Palestinians, in particular, is possible as it relates to borders, liberty of movement and security.
Therefore, it is important to remember that refusing any plan without coming to a sustainable agreement means that the status quo is the alternative, which means that in some cases what may be refused in theory remains the reality in practice.
President Trump’s son-in-law and adviser, Jared Kushner’s plan does appear to be a practical path to a long-term solution, but as yet leaves questions about the role for countries in the region that will be affected, especially Jordan.
Additionally, while the theory is easily discussed, the major difficulty will be practical application of the theory in reality.

Jordan: The need for a new start

In less than three months, the current Parliament will complete its last legislative term, and…