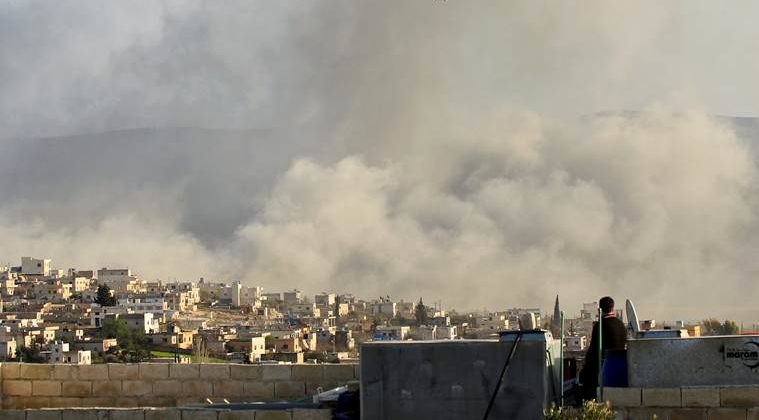 Comments Off on A step in Idlib Vs a step in Geneva
Despite efforts in Geneva to revive a political solution for Syria, the deteriorating situation in Idlib is clearly going to be the final chapter of the Syrian crisis. As positioning for the opportunities around rebuilding Syria come into focus, the agreements and support amongst the protagonists are collapsing.
The most pressure appears to be on Iran as it is facing a new wave of internal destabilization, especially after last week’s terrorist attack in Ahvaz, and a joint call from the different regional and international officials for regime change in Iran. This week also saw Syrian anti-aircraft defenses targeting Israeli jets shoot down a Russian military aircraft with 15 people on board.
The Russians accused Israel of “irresponsible actions” that led to the attack, which has increased military tensions. Russia has since announced the possible supply to Syria of sophisticated S-300 air defense systems, which will only increase the pressure.
As Russia orchestrates the end of the conflict, it is acting increasingly aggressively in order to maintain the upper hand and influence necessary to position for the impending rebuilding. We can see this in the proposal by some Russian officials to close Israeli access to Syrian airspace, which while may not be effective as Israel can launch an attack without crossing into Syrian airspace, it sends a very strong message and will limit Israel’s options and influence.
While the situation in Syria still has the potential to lead to a wider conflict, the only true option to contain the chaos in the region is through negotiation and peace. Russia is likely to try to control the situation, through continued war if necessary in order to position itself as the mediator. Sometimes war itself leads to peace, so new conflicts could represent the road toward a wider regional settlement.
Russia will likely continue to find itself in the middle of this escalation between Israel and Syria as Hezbollah and Iran could continue to escalate. However, the current pressure on Iran will affect Hezbollah and could lead Israel to act against them in order to isolate and strike a blow. This scenario has the potential to spread the Syrian conflict, but in the end regional settlement might be the only option that all parties have. Therefore, it is important always to think that the political solution in Syria might open the door for a wider regional settlement. Therefore, Idlib the last chapter in the Syrian crisis might have it impacts on the whole scene of the Syrian crisis.
Dr. Amer Al Sabaileh

Posted by: Amer Al Sabaileh
View more posts
In Jordan, “Income Tax Law” is not the only problem
The need for new political faces