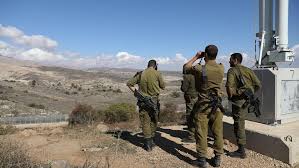 Comments Off on The new phase of Iran-Israel “semi-confrontation”
Recent weeks have seen the hostility between Iran and Israel develop from a secretive conflict to come out into the open. The ongoing Israeli attacks on Iranian targets in Syria combined with Israeli propaganda targeting Iran have increased with Israeli President Binyamin Netanyahu revealing files claiming to prove Iran has been running a secret nuclear program attained through sophisticated operations by Mossad.
This comes with wider escalation against Iran from the US placing more pressure on Iran to renegotiate the 2015 Nuclear Deal, Saudi Arabia continuing to run an anti-Iran campaign as well as the Moroccan Government cutting diplomatic ties with Iran, after claiming to have obtained proof that Hezbollah provided weapons and trained Polisario Front separatist fighters with support from the Iranian embassy in Algeria. This move from the Moroccans serves to position the Gulf Countries campaign against Iran as an Arab policy.
The US is running a multi-pronged international diplomacy campaign to increase the pressure on Iran, trying to isolate Tehran and contain its regional influence. Part of this campaign includes attempts to change the position of the EU countries to revise the Iranian Nuclear Deal. In combination, this is putting increasing pressure on Iran’s already volatile economy with the Rial plummeting to historic lows amid the economic and political uncertainty. As a result, we have seen the Iranian Government move to reporting foreign currency figures in Euros rather than US dollars, particularly when it comes to oil.
This increasing pressure from multiple sources will make if difficult for Iran to maintain its position that internal policies are not influenced by outside actors, as the pressure for defensive measures increases. We may also see offensive measures to push back from the Iranians, and the most likely place for any such move is Syria. Given the Israelis have taken the step to bring the intelligence war out into the open, we are likely to see new and open confrontations, even if by proxy.
These developments are indications of a new phase of conflict in the region. Openly declaring that Mossad has conducted intelligence operations inside Iran combined with the two recent attacks on Iranian targets in Syria by the Israelis indicate that open confrontation has begun. Israel has embarked on this path knowing full well the likelihood of Iranian retaliation, and while the international pressure will make it difficult for Iran to undertake a direct confrontation, southern Syria, the Golan Heights and southern Lebanon are fertile ground for increased proxy hostility.
Dr. Amer Al Sabaileh