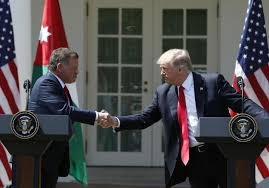 Comments Off on Jordan and US: where to agree and where to disagree

Jordan appears to be running a political strategy of opposing the US position of Jerusalem as the capital of Israel. According to the Jordanian vision, the US should be careful with this as it could be a hindrance for the peace process and potentially risk the stability of the region. Jordan clearly recognizes the importance of the US alliance, despite the disagreement with them on Jerusalem. US Vice President Mike Pence framed this, following his meeting with King Abdullah II of Jordan in Amman, as they “agreed to disagree”.

For such a critical American ally in the region, it is not a good sign to disagree on a major issue like this. Instead of focusing on this disagreement, Jordan seems to focus on the areas of US strategy in the region on which they do agree, and support strongly.
US foreign policy currently has three other major objectives; contesting the influence of Iran and its allies, stabilization of Syria according to the US vision, and managing the threat of North Korea.
On Syria, the US has taken a new approach to counter Russian efforts in Sochi, with a renewed focus on the Syrian political process, future elections and a new constitution. Jordan strongly supports these efforts and on January 26, the US, Saudi Arabia, France, Jordan and the UK presented a political plan to the UN Syrian Envoy, Staffan de Mistura, who called the proposal a “practical approach” to solving the political process in Syria. So, on this US policy area, Jordan is in lock step.
During the World Economic Forum last week, King Abduallah did an interview with CNN’s Fareed Zakaria, during which he said that Iran was meddling in the affairs of a number of Arab countries and exploiting local militias and religion in regional conflicts. He also called Saudi Arabia’s role in the Middle East as positive which draws “red lines” for Iran’s worrying activities. This strong criticism by King Abdullah of Iranian policies has provoked strong criticism form the Iranian side, but at the same time it falls perfectly in line with the American approach.
Finally, King Abdullah recently approved Jordanian Cabinet Resolution number 6056 to cut all diplomatic relations with North Korean, clearly on track with the US position and strategies there.
With Jordanian alignment on key US foreign policy, we should be sending far more positive signals to Washington. There is more that we agree on than not. While Jordan may not support the Jerusalem position, there are other critical policies shaping the region that Jordan does support its key ally on. Jordan should be communicating that far more strongly, and perhaps then it might have a bit more influence on the policies that the leadership of the country does not support.
Dr. Amer Al Sabaileh