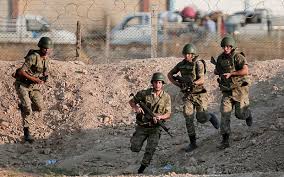 Comments Off on The impacts of Turkey’s new position on Syrian crisis
The regional dynamics are clearly imposing a new reality on the Syrian crisis, while the military coup in Turkey has created the opportunity for the Turkish President Recep Tayyip Erdogan to reposition himself and his administration taking a systematic approach to change his previous policies and use a new style of politics to solidify his position.
Since May 2016 when Ahmet Davutoglu lost the Prime Ministership, the Turkish government has been changing its policy settings in order to break the isolation from other countries due to its former policies. Restoring relations with Russia was one of the major priorities. The Turkish President’s recent visit to St Petersburg was a practical step in this direction, where discussions included Turkey’s new position on the Syrian crisis. It is important to remember the tensions between Turkey and Russia over the last 12 months due to clashing involvement in Syria.
The logic behind the move is Turkey’s priority to prevent any possible future for an independent Kurdish state. Turkey has allies in this endeavor as Syria and Iran also oppose an independent Kurdish state and this common goal has brought them together to face this potential threat to their interests. The shift in language from Turkish officials highlights this as they express their concerns about protecting the sovereignty and unity of the Syrian state.
It is now in Turkey’s interests to stabilize Syria as soon as possible as prolonging the crisis only increases the changes of a new Kurdish state somewhere along the Turkish-Syrian border.
This shift in priority and action from Turkey regarding Syria could be a real game changer. The Turkish-Russian rapprochement means that Ankara no longer views Syria through the zero sum lens of toppling the regime versus maintaining the crisis, but as an existential threat to its borders, no matter whom else support such a move.
As a result, the US has been forced to act on its own without intermediaries, especially in northern Syria. US warplanes have flown over the city of Hasakah in a symbolic gesture to protect the balance of power in that region. Until recently, the US worked very closely with Turkey in actions in Syria.
All this suggests that military escalation in the north of Syria is highly possible, especially in areas controlled by Kurdish forces. While this shift in Turkish policy could rebalance power and influence in the region, it will definitely lead to a noticeable change in the crisis in Syria.
The interesting question, however, is whether this new position from Turkey is real or just a temporary tactical move that on one hand is a powerful move to further its own strategic interests in the region, but on the other provides leverage for Turkey amongst its key allies. The impact on internal Turkish politics could be the key to this and to whether Erdogan can maintain the distancing from the US, by playing into Russia’s hands.
Dr. Amer Al Sabaileh
amersabaileh@yahoo.com