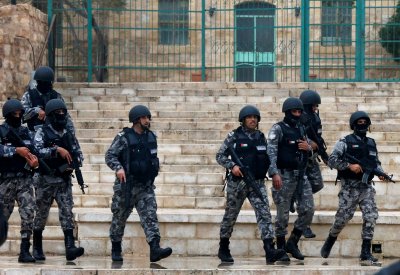 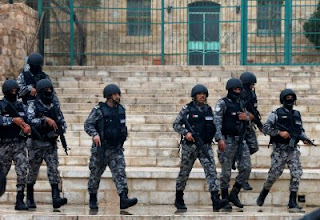 The degenerating presence of ISIS on the Syrian and Iraqi soil forces the group to adopt a new strategy that aims to compensate its losses, offers the impression that it still retains its strength, and that it is still able to hit everywhere. Moreover, it is vital for the group to seek creating new climates that form attraction points for its members departing Syria and Iraq.
The logical interpretation of the incidents in the city of Karak indicates the possibility of these operations being linked to a central decision, which means that the cell might not be an individual one. It might be a cell that works according to group’s methodology and strategy.
This is what the shape of the operation obviously shows, as well as the data and logistics that have been revealed. The location of the operation could also confirm this hypothesis. For instance, if we agreed that the security forces are the primary targets of this operation this explains the group’s desire to strike more than one bird with one stone by attacking the security forces as well as striking the tourist attraction. This is usually what happens in order to achieve many objectives such as:
1-   A moral blow to the state security system by displaying its inability to protect its tourist attractions.
2-   Taking advantage of the rapid speed in which news spreads through media in case of an assault on a historical landmark and tourist attraction.
3-   The possibility of foreign tourists being present in these areas, which gives the assault a global dimension.
4-   These assaults also aim at inflicting economic blow on the country that is dependent on tourism as its means of income. It also creates atmosphere of angry citizens of the area, who are harmed by the dearth of tourism, or the poor economic situation that accompanies such circumstances so that they can exploit it later on in the future.
Henceforth, the strategy that entails striking tourist areas is found to be the most effective and successful policy for many groups today.
The regression of ISIS’s organization in Syria and Iraq, along with the recent shifts following the battle of Aleppo causes Jordan to face series of challenges and dangers:
First, the relocation of fighters from one front to other fronts intensifies the possibilities of individual operations and increases the organization’s desire to create new hot spots.
Second, Jordan’s most critical challenge is the path of the battles in Syria after Aleppo, in which its compass might point towards the Syrian Southern border, placing increasing pressure on the Jordanian border and raising the danger ratio of repeated attacks. In this case, repeated attempts that aim at striking the national security and creating an atmosphere of internal disputes will take place; the
organization’s subjects seek to exploit and employ it to the best of their interests.
Third, one of the prominent dangers of the next phase is characterized by the continuous regeneration of fighter cells and the activation of dormant cells that have been operating silently during the past years, and have been able to build networks of allies in the areas in which they are located.
Fourth, the arrival of these cells to the “individual working” phase; they will be isolated since the fall of the central order of the organization. These cells might be seeking to apply individual actions that depend on the surprise element, and usually aim at causing the most damage with minimal costs. This means uncomplicated operations such as; shooting at a security officer, or striking a crowded area of civilians using primitive techniques.
The increasing pressure on the fighters in Syria, and the Turkish borders being closed might push the fighters into targeting new areas and finding exit routes from which they can use in order to escape this state of pressure.
Thus, the challenges Jordan is facing are enormous. The alteration from having to deal with direct threats means that Jordan has moved into the open and direct confrontation stage with these organizations. That is why Jordan has to change the framework and the system in which it deals with these organizations. The graphic organizer of recent assaults that targeted Jordan indicates obvious increase in the configuration of the operations, their method and objectives. This means that they should be dealt with in a strictly firm way and in a way that foresees the coming confrontations in order to avoid any further dangerous and aggressive future threats.
Dr. Amer Al Sabaileh
amersabaileh@yahoo.com

Emirati Arabi UnitiEmirati ArabijordanTurchiaItaliaCovid-19SyriaTerrorismEuropaMedio Oriente
We use cookies to ensure that we give you the best experience on our website. If you continue to use this site we will assume that you are happy with it.Ok