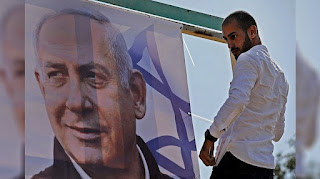 Many are pondering whether the outcome of the forthcoming Israeli election will have a negative impact on the Jordanian-Israeli relations.

In recent years, these relations deteriorated. However, many observers underline that after the departure of Benjamin Netanyahu, the former Israeli prime minister, relations did improve at an official level, with more courage exhibited by the Jordanian side, which did and continues to publicize the ongoing meetings with Israeli leaders and got more engaged diplomatically and politically.
This said, there is high concern, on the official Jordanian side, about the likelihood of Netanyahu’s return as the next prime minister. Such a development surely warrants adopting a realpolitik vision that entails expanding beyond any possible political change in Israel.
Undoubtedly, the peace treaty and the security coordination between Jordan and Israel are two important strategic assets for Jordan. Yet, there is always a need to increase the value of these assets and capitalize on them.
A possible Netanyahu return is the concern and the choice of Israelis. Hence, there is no space for hate or love in real politics, especially considering the peace treaty with Jordan, which is a matter of necessity rather than choice, due to geographic, security, and demographic considerations, as it is the case with the Gulf countries.
Through its geographic location, borders, security, and demographic situation, Jordan has leverage over regional relations. But to activate this impact, there is need for progressive diplomacy that takes into consideration the ongoing changes and key aspects pertinent to bilateral relations, for finding common interests, playing a vital role, and maximizing the value of geography.
In recent years, chaos has become an essential feature of the regional scene, driving the countries of the region to adopt and even benefit from it, as is the case with the chaos in Syria, which provided Israel with the opportunity to target the activities of Iran, Hezbollah, and Syria itself.
It might be legitimate for Jordan to narrow its relationship with Israel. However, this choice is not always available. Further, while facing the de facto situation, Jordan’s importance must be highlighted to any Israeli government, regardless of its political affiliation or position.
The recent Israeli-Lebanese agreement is a clear indicator that many regional political actors are concerned with the socio-economic situation, which is reaching a very critical point, and puts at risk even the legitimacy of these parties and political actors. Therefore, overcoming economic difficulties, finding job opportunities, and improving the social conditions should be the priority in the coming phase.
Jordan should capitalize on its geographic position and adopt an open-door policy, transforming Amman into a regional hub for reconciliation. This approach is the only guarantor for Jordan’s long-term economic stability and national security.
Dr. Amer Al Sabaileh