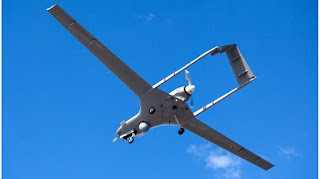 Iranian drones put Tehran in direct confrontation with the West

Recently media reports of Iranian drones being used by Russia in Ukraine were preceded two months ago during Putin’s visit to Iran where he set up the deal to purchase them. These Iranian drones have improved the Russians’ ability to attack Kiev without moving troops or the risk of loss in a counter-offensive. It also highlights the Russian’s lack of an effective locally made alternative, and they have needed a solution especially since they have suffered from the “bayraktar” Turkish-made drones used by the Ukrainian army.

Strategically, the Russians have a limited window of effectiveness with the Iranian drones, as Ukraine will soon be equipped with adequate defence systems that will neutralize their effectiveness. Given this, the Russians are focussing on strategic targets such as power and other critical infrastructure to maximise impact and undermine the perception and authority of Ukrainian leadership amongst its people.

Politically, the use of Iranian drones by the Russians clearly pits Iran against the Western allies of Ukraine. This could push the EU and US to consider taking blunt positions against Iran. It is also a very delicate time for Tehran as it faces internal threats and waves of demonstrations and could oblige the EU and US to take official positions on the human rights and personal freedom issues playing out in Iran.

While Iran is denying any involvement in the war, the Ukraine is leveraging the use of Iranian drones as part of an appeal to Israel to supply their military defence systems. Israel has every interest in demonstrating to the West what it has always proclaimed, that the military risks of Iran are very real.

This is a rare time where Iran is adopting an explicit approach that antagonizes the West, in a delicate time for all parties with sensitivities around the potential for nuclear war in Ukraine and Iran’s nuclear program. It further confirms the concerns of the Gulf countries regarding Iran’s aggressive policies and military capacities.

With the decision to support Russia militarily, Tehran might lose support amongst pro-Iranian western countries, especially those who were keen to restore the nuclear deal. Entering the Ukraine conflict with military support for Russia could well provoke serious and concrete decisions against Iran.