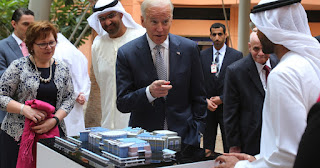 The recent escalations in the West Bank and Jerusalem continue to be one of the most crucial developments that threaten to trigger widespread violence and instability. Many have expected the situation to deteriorate due to Israel’s flag march, where thousands of Israelis marched toward East Jerusalem. Yet, Palestinian groups, including Hamas, have not responded.

This lack of action raised some eyebrows, leading many to question the reasons behind the silence.Undertaking a passive approach might have resulted from a mutual target to safeguard Naftali Bennett’s government and avoid the return of Benjamin Netanyahu, at least for the Palestinian actors. However, the silent approach might not continue with the increasing tension and the actors having very limited options.President Joe Biden’s visit to the region, which was postponed tentatively till July, might inaugurate a new phase of economic cooperation and push forward the peace process towards expanding the Abraham Accords with new countries. It will also highlight the need for the US to reunite its allies as part of its global policy to counter Russia and China.However, issues are expected during the anticipated visit, the first being US-Saudi relations, which have seen a long period of cold relations. Secondly, regional instability is widespread. Across the region, the return of Daesh is possible, amongst other threats. In Syria, there are serious indicators of the possible return of Daesh in the Raqqa region. The Turkish return to the north of Syria might also create a new conflict which gives fertile grounds for Daesh insurgents to return. South of Syria is again becoming a source of serious threats and risks for Jordan, especially involving Iran-sponsored militias who antagonize Jordan and represent a real threat to Jordan’s national security.

This risk is not limited to drug smuggling but also Iran’s desire to transform Jordan into a weapon smuggling transit hub to the West Bank, which underlines the proxy war that Iran always sought in its confrontation with Israel.Iraq is also suffering from similar threats, with Daesh gaining ground and pro-Iranian groups strongly obstructing the political process. Finally, Lebanon, with its fragile domestic situation, only adds more security challenges to the region.So, the US’ efforts might be a good attempt to counter an escalation. But, it is important to remember that the general situation in the region is likely not favorable for a long-term stability plan.Although there is some optimism regarding ambitious plans and opportunities for a wide regional economic cooperation, many factors might reinforce instability, especially with the presence of a wide network of criminality and the return of terrorist groups and, above all, politically exploited militias.