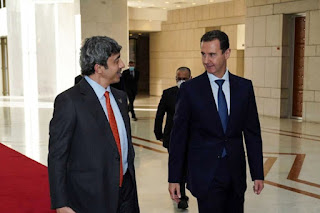 Rapprochement initiatives by some Arab countries have begun towards Syria. While the Emirati foreign minister’s visit to Damascus was not a surprise as the Emiratis have always been in favour of reconnecting with Syria, it is still an important demonstration of the potential for Damascus to return to the Arab League.

The Emirati position on Syria took a radical turn when the Gulf country took strong hold positions against Islamic groups that took power in some Arab countries during the Arab Spring. The conflict between the UAE and Turkey also pushed Abu Dhabi to change its position based on the rule; the enemy of my enemy is my friend.

Many of the obstacles to Syria being included have changed. There is no clear veto from Saudi Arabia, which is the critical position from both a Gulf and Arab level. While the US position is still unclear, but there is no clear veto there either, although the sanctions in the Caesar Syria Civilian Protection Act, political reconciliation is difficult. The absence of clear initiative towards Syria from the US will encourage countries to begin taking steps, some may even consider that by doing so the US will be obliged to accept these steps.

For Syria, a return to the Arab League may not add any value, given they have lived without it for over a decade. However, tactically, is it an important step to begin breaking down the taboo of dealing with the government and reopen Syria to the international community.

Syrians also know that the escalating situation in Lebanon and the expected escalation in Iraq will create the need for the international community to end the crisis. Meanwhile, the Iranian presence and requests to contain them is also a strategic issue that Syrians know how to deal with. They could also create space for a political manoeuvre with Russia pushing for a regional settlement and in this way there is a possibility of resuming the long-blocked peace initiative with Israel, with Russian mediation.

The lack of any international plan to deal with Syria will encourage countries to fill the vacuum and try to create a solution for the crisis by focusing more on economic and strategic opportunities. If efforts within the Arab League succeed to reinclude Syria, particularly since Algeria is hosting the upcoming summit and is one of the strongest players in favor of this, the next stage will be increased efforts at the international level to normalise relations with Syria.

At this stage everybody is taking a step forward, with one eye on the US reaction, so it is ultimately Washington who will decide if the orange light turns green or red.