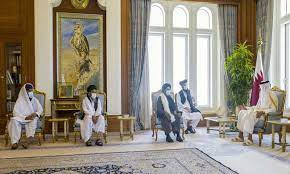 Comments Off on Int’l recognition of the Taliban and problems of Afghanistan?

Qatar’s Emir Sheikh Tamim Bin Hamad Al Thani has called on world leaders to remain engaged with the Taliban in Afghanistan, as he underlined his country’s commitment to contribute to the peaceful resolution of conflicts. During the 76th session of the United Nations General Assembly in New York, the Emir stressed the significance of the continued support of the international community to the Afghan people, describing the current situation as a critical stage, and to “separate between humanitarian aid and political differences”.

While this position was expected, the reality of the situation needs to be considered. The situation in Afghanistan is clearly complex, and security risks will continue as the interim government continues to consolidate its power, as there are some reports of internal disputes within the government around the lack of options to manage the current economic crisis. The Taliban has denied any divisions amongst its leadership.

Taliban leaders are seeking international legitimacy and are making some limited concessions to the international community to advance this goal. This could include further facilitating the return to the country of people who have the right to leave or engage in counterterrorism operations against Daesh-Khorasan.

Politically, without the participation of women, minorities or non-Taliban members in the interim government, it is difficult to accept their claims that they will form an inclusive government. It will be even more difficult should they begin to appoint known extremists as Cabinet ministers, potentially including senior officials of the Haqqani network who have particularly strong ties to Al Qaeda, although the Taliban denies these connections exist.

As the Taliban continues to consolidate its position and power, they are still facing logistic and security challenges on the ground. Ever since the Daesh-Khorasan carried out a suicide operation and rocket attacks on the Kabul airport, similar attacks have increased. The Daesh-Khorasan has since claimed responsibility for several bomb attacks against Taliban personnel in Jalalabad between September 18 and 20. In fact, during this time, there were at least seven attacks against Taliban forces in Jalalabad, and two more explosions were reported.

Although there was no immediate claim of responsibility for the attacks from Daesh, these are the group’s first direct attack on the Taliban since taking power. These attacks against the Taliban in Jalalabad demonstrate the intention of the terrorist groups to continue their combat campaign as they overcome the Taliban’s ability to detect and deter attacks by militants. There are expectations that Daesh-Khorasan will continue to attack government, security and civilian targets in Kabul and other cities to undermine Taliban rule. This is likely to encourage other armed groups, which will see an opportunity to reorganise and operate on Afghani soil.

There is clearly a high risk of further attacks and armed clashes in the coming days as Daesh-Khorasan is directly challenging Taliban control in provinces where the armed forces have a strong presence.