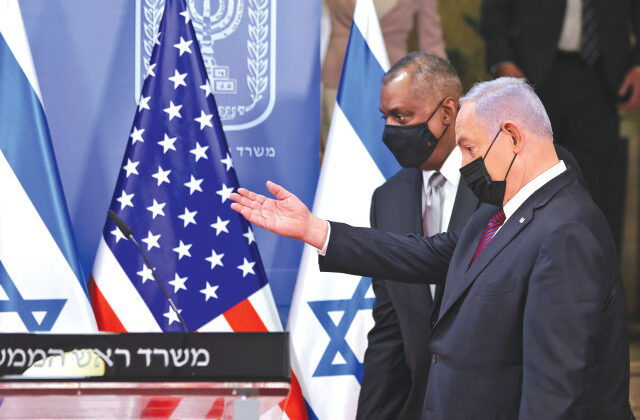 Comments Off on The short-term risks of Israel-Iran confrontation

There have recently been several incidents of indirect confrontation between Iran and Israel, which demonstrate that neither have the desire for open conflict, but it has been taking a new direction with the recent incident at Iran’s Natanz nuclear plant. The timing is also interesting as talks were underway in Vienna to restore the 2015 nuclear deal and just prior, the US Defence Secretary visited Israel and Prime Minister Benjamin Netanyahu told him that Israel and the US agree on never allowing Iran to obtain nuclear weapons.

Just prior to the incident at Natanz, an Iranian cargo ship believed to be a base for the paramilitary Islamic Revolutionary Guard Corps (IRGC) and anchored for years in the Red Sea off Yemen was attacked. In answer to which, a commercial vessel owned by an Israeli firm was attacked off the coast of the United Arab Emirates in Gulf waters.

This response, along with many other similar actions demonstrate that Iran has steadily increased its ability to exploit the threat of conventional and asymmetric warfare to maritime traffic in the Gulf, even though the power balance in the gulf is not in its favor. It does however, underline Israel and the Gulf States’ narrative regarding the need to expand any talks with Iran to include its ballistic capacities and its aggressive regional policies, rather than limiting discussions to a nuclear agreement.

Since the assassination of General Qassim Soleimani, the Iranians have not directly responded to any attach, but rather have adopted a kind of proxy approach through various pro-Iranian militias in Iraq or other threats out of Yemen. However, internal Iranian dynamics in the lead up to Presidential Elections scheduled for 18 June this year, suggest that a different approach might be adopted as it will play stronger internally to respond more directly.

The struggle between the two camps of reformists and conservatives in an election year will impact Iran’s regional policy and even its approach to the international community. The conservative camp, which is much more influential today holding the key positions in the Iranian political infrastructure, is unlikely to repeat the mistake of allowing the reformists to make a deal that removes sanctions and enables a reconnection to the global economy, as it will be too popular amongst voters. In fact, the conservatives will likely be pushing for a more aggressive approach and response to any attack on Iran and delay any removal of sanctions.

Both Israel and Iran are passing through a less stable internal political environment at the moment, as Netanyahu is desperately trying to form a cabinet, and the conservative powers in Iran are trying to position strongly against their reformist rivals for the upcoming Presidential Election. This kind of internal instability and competition often turn regional policies into a tool to serve and strengthen their internal positions, so we may see an escalatory approach might from both sides. The next few months are at risk of tension and indirect confrontation, which could evolve into outright aggression.

There is no doubt that the situation in Iran is difficult due to years of sanctions and separation from the global economy, and Israel appears to be quite capable of targeting Iran within its own borders, as well as in Syria. However, Iran has a strong strategic position in the Hormuz Strait that directly impacts international trade and oil resources suggesting that should Iran look to respond, there are real risks on an international level for the oil market, maritime movements, and global trade.

In March this year, Iran signed a 25-year cooperation agreement with China which will also boost their position and given them more options. At the same time, if Iran loses the opportunity to return to the nuclear deal, or something similar, and position itself as an enemy of the US and the EU, open confrontation with Iran could be imminent. So unless there is a clear international vision and a regional consensus on how to deal with Iran, the risk of more incidents and increasing instability will always exist.