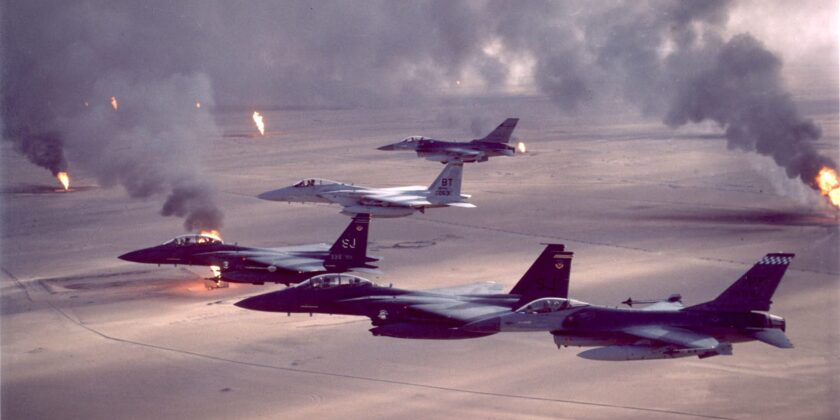 On January 16 this we marked 30 years since the outbreak of the first Gulf War, in which the international coalition attacked Saddam Hussein’s Iraq following his invasion of Kuwait. The beginning of the war and its rapid evolution did not give the impression of what its consequences would be, in the short, medium and long term. There was no indication at the time that this war would actually change the face of the Middle East forever, as the beginning of a long phase of instability that persists today. As the thirtieth anniversary passes, it gives us the opportunity to analyze the politics, international strategies and their implications across the Middle East.

Regardless of the declared reasons behind the Iraqi aggression and the invasion of neighboring Kuwait, or other Gulf countries, it is possible to view the situation from the change in geopolitics after the fall of the wall of Berlin in 1989 which lead to American unipolar domination of the international political scene including the Middle East. It is also important to remember that Saddam came to power using Pan-Arabist slogans, starting a war against Iran and proposing himself as the defender of the Arab identity, supported by the same countries that would later enter his military sights.

Unexpectedly, this conflict started a long phase of political instability and security problems in several neighbouring states. Starting from the fall of Iraq and the failed peace process that started in Madrid in 1992 and actually stopped in 1995 due to the assassination of Israeli Prime Minister, Yitzhak Rabin. This war transformed Iraq into a continual source of problems that have accumulated and stratified, producing their own devastating effects throughout the region. The latent issues developed and worsened until the epilogue, still not definitive, represented by the second Gulf War beginning in 2003.

Even following the second Gulf War, the issues were not solved and did not go away, they simply took on new dimensions. The Shiite-Sunni schism worsened as sectarian thinking came to the surface, which over time became one of the motives for the conflicts that broke out in other Arab countries. This has been exacerbated by Iran with its expansionist political ambitions and influence, becoming a nightmare for many countries that have allied themselves to counter it.

The war against Iraq is over, yet the internal conflicts are ongoing with destructive potential. Iraq was nothing more than the first pawn to move on a chessboard that has seen the birth and development of other serious crises beyond Iraq, Syria and Lebanon. Today countries that in the past were fundamental in determining the balance of the region are in crisis or no longer have the same influence as in the past. They are limited in their actions by an uninterrupted sequence of internal problems which have undermined their safety and stability.

The war on Iraq revealed clearly the crisis of Arab identity which is increasingly fragmented, characterized by problems of growing poverty, rampant unemployment, lack of political representation and socio-economic development. This is the current scene that was triggered by a war that effectively lasted a few days but which has produced tragic consequences whose effects are evident today.

Unfortunately, it is difficult to predict a positive change in the immediate future, but realistically the 30 years that have passed can be useful to understand the nature of the problems, the short-sighted mistakes committed by a unipolar international policy that started a conflict that we could define as “unfinished”, as its aftermath is still felt today.

So, what can we learn from the last 30 years? Firstly, the Arab world’s problems need to be tackled differently by the new generation. A cultural revolution is needed to eliminate the sectarian divisions and thoughts rooted in Arab societies, as this will always lead to more fragmentation and destruction. At the same time, support for the concept of cultural change is important to raise awareness, but we must remember that change must come from within.

The short-term risks of Israel-Iran confrontation

There have recently been several incidents of indirect confrontation between Iran and Israel, which demonstrate…