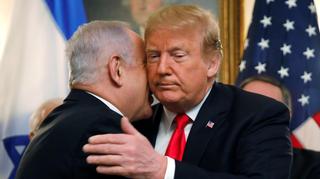 Comments Off on Trump’s Middle East ‘peace deal’, what next?
US President Trump has indicated that we are days away from the announcement of his long-awaited Middle East peace plan, after he meets with Israeli Prime Minister Benjamin Netanyahu and his election-rival Benny Gantz at the White House. The plan is likely to include the new status quo that has been implemented, so there is a lot of expectation that it will not be popular amongst Palestinians. Even Trump himself acknowledged that, but assured them it would actually benefit them. Refusal to accept the new plan is unlikely to change things on the ground, as there is a new reality that makes new rules and must be the basis for any new vision for peace.
Calls for Palestinian elections to be held in Jerusalem next year will not change anything on the ground. Neither would individual attacks or Qassam rocket launches into Israel, as these forms of resistance are manageable from a security point of view for Israel. Hamas’ activities are all driven through the prism of internal politics with the Palestinian Authority, which is their main target, rather than a sustainable peace deal.
On the Israeli side, both Netanyahu and Gantz are on the same page, and trying to gain political mileage from expansion policies, promising to annex the Jordan Valley with the support of the international community. From this perspective, it does not matter who forms government in Israel, the annexation policy will be implemented soon enough.
Interestingly, more and more Palestinian politicians, including potential successors to Abbas, are recognising that the economic support from the US and Israel that will likely come as part of the new peace plan will fundamentally improve the lives and living conditions of Palestinians.
Meanwhile, there are two regional blocks competing to bring their supporters to power in Palestine, although they do not appear to have much say in the shape of the peace plan. Egypt and the UAE are trying to prevent Hamas from playing a role in the next phase, lobbying popular figures in the West Ban, such as Marwan Barghouti, who they believe will help pave the way to bring Mohammed Dahlan to power. On the other hand, the Turkish-Qatari block is promoting Hamas as the only effective player in Palestinian territory.
These players may not have much impact on the next phase, more likely to be influential are those already in power within the Palestinian Authority, who are working closely and coordinating with Israeli authorities on a daily basis. Those who are already in power and working closely with them are far more attractive as partners for the US and Israel, especially if they can guarantee stability in return for economic support and growth.
From a Jordanian perspective, the soon to be announced phase could represent a threat. Jordan is facing serious challenges in navigating any peace process and its implications;  This makes it critical for Jordan to focus on borders, refugees and security. As the situation has evolved over many years, there is an increasing pressure to find a practical political solution. Perhaps it is time to go back to US president Ronald Reagan, who said; “There is, however, another way to peace. The final status of these lands must, of course, be reached through the give-and-take of negotiations; but it is the firm view of the United States that self-government by the Palestinians of the West Bank and Gaza in association with Jordan offers the best chance for a durable, just and lasting peace.”
Practically, Jordan must ensure it does not isolate itself, or disengage with any plan that will impact the country. Jordan is inextricably linked to any peace process by geography, politics and history. Economic hardship is not just being felt in Palestine, as Jordan and its people are also suffering, as are many across the region. Decision makers must take this into account, and the implications for Jordan of a peace process that involves economic incentives. Internal stability must be a priority for Jordanian policymakers, as social disorder creates fertile ground for security risks from organised crime to terrorism.
Jordan needs large scale projects in transport, agriculture and other local industries as pillars for successful economic development. Jordanians are resilient and can weather economic hardship, but there must be a clear path to success and change for them to continue. Without hope, helplessness will prevail and this will also put Jordan’s security and stability at risk.
The risks for Jordan are extremely high, these multi-dimensional challenges must be managed with new strategies and new leaders capable of anticipating the challenges before they become reality. Jordan cannot be an obstacle to the solutions, but at the same time, the solutions cannot be at the cost of Jordanians. These tricky waters must be navigated carefully and strategically to ensure the best outcome for the Jordanian people, who need to trust that this is what their politicians are doing.
Dr. Amer Al Sabaileh