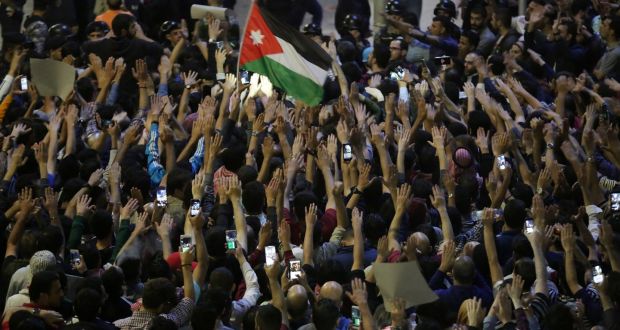 Comments Off on Jordan: The need of administrative “white-collar” revolution
Jordan faces many challenges both political and economic. Politically, Jordan should face the risk of the deterioration in the image and reputation of the state. Meanwhile its institutions seem to be increasingly less efficient and the bureaucracy is weakening, which is impacting the decision-making mechanisms and the capacity for crisis management. All this while there is a growing need to rebuild the concept of social solidarity to face the increasing risk of having a fractured country.
The efficiency of the bureaucracy is a critical issue to resolve. What is required is an administrative or white-collar revolution, to revive the spirit of our institutions back on the concept of reward and impeachment. The bureaucracy must clearly know that success will be rewarded but that failures and mistakes will be held accountable to ensure that everyone does their job properly. Reform is necessary in order for our institutions to competently respond to a crisis in a steadfast manner.
Security services require a continuous process of reform, much like the risks and threats of terrorism and criminals they are facing evolve. The risk of new waves of terrorism are serious as terrorist groups attempt to reorganize across the region, this threat should not be underestimated.
At the same time, internal security risks are growing with the development of ever more sophisticated regional criminal groups connected to international groups. New criminal techniques are being adopted by local criminals which is increasingly boosting their capacity, and making it ever more difficult for the security services managing critical challenges.
Enhancing the capacity of the security apparatus is not limited to technology and logistics, but also understanding the changing nature of the risks as well as the capacity to manage a crisis situation.
There is a real opportunity for Jordan at the moment to implement a fast action strategy based on serious responses against bureaucrats who are not conducting their job properly. To create a real impression of change and progress, Jordan needs a revolution from within the establishment rather than an administrative shift with slogans.
People need to see action and real change at all levels, so they notice the changes in their daily lives. This can only be done by impacting all types of officials with a new motivation structure to change the mechanisms of work and achievement.
Jordan currently has far too many officials who have mastered the art of creating problems and failing to address them, or even be able to competently communicate, which is a basic and necessary component of governing. A comprehensive review of the state’s policies should also include identifying these officials who mislead the system and think they are untouchable because the system will never change. This kind of attitude and incompetence is a major part of Jordan’s problem, and constructive change must include purging the system of these people.
A shared sense of responsibility is the key to open the doors of credibility and trust. This sense of awareness can only be built by building and rewarding efficiency, which in turn leads to effective political leadership, rather than a lack of responsibility which destroys any efficiency in the system.
Dr. Amer Al Sabaileh

Posted by: Amer Al Sabaileh
View more posts
Challenges for the future of Jordan
The far "goal" of regional peace