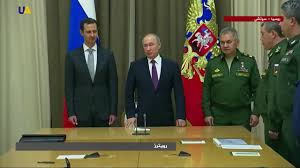 Comments Off on The Visit of Assad to Russia
The Syrian President, Bashar Al Assad’s visit to Sochi in Russia last week is indicative of a new development in Syria. The last time Al Assad visited Moscow in 2015, was directly after the Russian military intervention in Syria.
This new meeting, two years after the first, was to declare the end of the Russian military presence in Syria, with the fall of ISIS. This recent meeting between Assad and Putin included a series of Russian Generals, and appeared to include an evaluation of the outcomes in Syria. It likely also included a conversation about preparing for a political solution, now that the military victory has been won.
The point of Moscow’s intervention is still unlikely to have been to achieve a settlement. It is more likely their intentions were to intervene in order to create stronger allies in the region. They have been successful in that endeavor with Turkey and Iran, as can be see with the Astana Summit. This trio is likely to push for their agreed outcomes at the Geneva Summit where the future of Syria is decided.
The way Russia has approached Syria indicates they were always seeking to remove obstacles to their preferred political solution. The key obstacles to a political solution included Turkey’s previous anti-Assad position along with the numerous armed but uncontrolled groups that existed in Syria. The Astana summit focussed on technical measures such as the ceasefire, which lead to the de-escalation zones. Despite the focus on the technical elements, the outcomes are clearly political.
Russia recognizes the importance of the Geneva Summit, as a legitimate solution must come from a formal UN process. So the efforts in Astana and Sochi are designed to arrive in Geneva with a political solution that is supported. The Russians have shifted the positions of several regional and international countries involved, and have put an end to the armed groups in Syria. Those groups have stabilized and are now united as the opposition political group in Syria, prepared to participate in legitimate political processes.
In addition to the military achievements, which gave them political influence, the Russian approach managed to weaken the diverse opposition groups, which forced them to join together. In addition it forced the other state actors in Syria to change their position on political aspects to be in line with the Russian agenda.
Of the groups coming to Geneva to agree on a solution, we will see the united opposition groups, and now that ISIS is defeated, their representatives will no longer have a seat at the table. The symbolism of the meeting between Putin and Assad suggests the construction of an enduring political solution in Syria has already started.
Dr. Amer Al Sabaileh
amersabaileh@yahoo.com