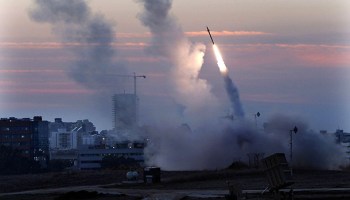 Comments Off on What after the Syrian Israeli clash?
The recent Israeli attack in Syria could be part of a rebalanced power dynamic in the region. During the Syrian crisis Israel has launched several strikes against Syrian targets, which they claim were Hezbollah convoys and personnel.
This recent attack is one of the few times that Israel has actually declared it with sirens in Israel. Perhaps because of the consequences, including debris from a rocket in the northern Jordanian city of Irbid.
Syria’s reaction of launching missiles and a strong statement from the military is entirely new. This suggests they had support in this response.
According to many experts the surface to air S-200 (SA-5) missiles used by the Syrian army were unlikely to shoot down the Israeli jets, although their S300 missiles could have been more effective. These Russian made Syrian missiles meant Israel had to use its Arrow 3 missile defense system for the first time to destroy what the IDF described as a ballistic threat.
This was not the first time that Israeli jets conducted a strike in Syria, but it was the first time that they faced a strong military reaction. This could be a turning point as Israel becomes more cautious in carrying out such attacks.
Interestingly, it wasn’t only the military response from Syria that was novel. The Russian Foreign Ministry summoned Israel's Ambassador to Moscow to protest the Israeli raid in Syria. This is the first time that Russia has interfered in this kind of incident. It is especially interesting given how recently Israeli Prime Minister Netanyahu visited Moscow, which does not appear to have impacted positively on relations between the two countries.
Russia’s long-term presence in Syria has already reshaped the balance of power. This will have implications for several countries, especially Israel who is not used to asking permission to conduct an attack.
While Russia is not an enemy to Israel, it sees Syria as an ally so Russia’s ongoing presence in the region could have wider impacts, including on regional settlement. Moscow is likely to engage in all of the issues that face the region, including the peace process. So perhaps Russia would like to see this confrontation lead to more constructive negotiations.
Dr. Amer Al Sabaileh
amersabaileh@yahoo.com