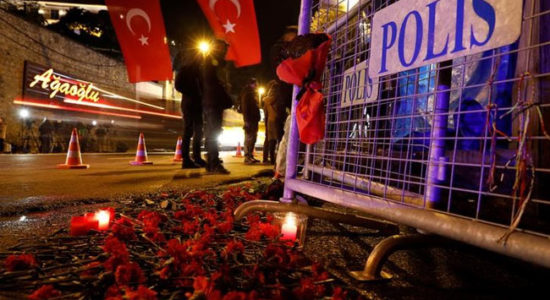 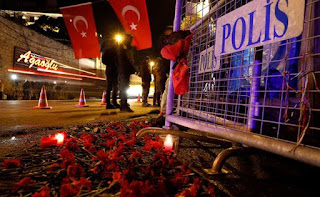 The remarkable shift in the method of the terrorist operation carried-out by ISIS in Istanbul, especially from the technical and tactical perspective, indicates ISIS’s shift in adopting a more complicated advanced approach, which could be classified as one of the intelligence operation in the form and the implementation process; particularly, in the assailant’s ability to carry – out the attack during vital timing: “New Year’s Eve celebrations” in spite of the warnings that had been released and the security measures that had been assumed in order to confront such danger. The most dangerous aspect, which marks an unprecedented occurrence, is that the attacker did not pursue a previous approach in his attack like blasting himself, or remaining on sight fighting until killed. On the contrary, he was able to flee the scene and go into hiding to this day.
This data presented opens the door wide open for questions, specifically regarding the security challenges facing and will face Turkey, as well as other countries in the future. Particularly since the hypothesis of implementing an operation of this magnitude, in a well-known tourist attraction despite taking all security measures, indicates a highly penetrative ability of both security and community system. The ability of a person to carry-out such an operation is a sign that significantly indicates the presence of catalysts and internal incubators working to facilitate all phases of the operation: access, mission accomplished by shooting down the target, withdrawal and disappearance.
The strike facing Turkey today occurs at a time when Turkey is reformulating its political positions; embarking on an era of transformations that initially started to appear by ending the battle of Aleppo and moving into the truce phase in Syria, and Turkey’s role in bringing many parties to the negotiation table.
The successive security strikes also occur at a time when Turkey’s security system is going through a restructuring phase, after the futile military coup attempt, intensifying the complexity of Turkey’s mission and its ability to counter terrorism; apart from the political challenges and negative climates formed by the Turkish policy in recent years, which resulted in increased number of enemies and fewer friends and allies.
Turkey has been trying very hard to recover from the dearth of tourism that started with the Russian fighter Jet crash and the absence of Russian tourist presence, as well as the destructive fallouts due to a number of terrorist attacks targeting European tourists, and then the bombing of Istanbul’s airport. All these were situations reinforcing a hiatus in tourism, and then came the latest attacks on Istanbul as a real blow to the Turkish economy and tourism, which have been drained dramatically lately. These developments should affect large Turkish strategic projects as well, especially in the transportation sector and airports’ projects that have been seeking to turn Turkey into the largest hub in Europe. The issue of lack of security that is being rooted now will create a new reality of isolation difficult to overcome in the future; the security that has been being built for many long years could be lost in a matter of few months, especially when civilians are the main targets of terrorist attacks; not just the security forces.
The security reading regarding the attack on Istanbul indicates a remarkable shift in the nature of the operations implemented by the organization of ISIS, which still rotates around similar traditional operations, but that incorporates far more complicated planning and technical dimension. Accordingly, the world might be facing more intricate and sophisticated operations in the imminent future.
Dr. Amer Al Sabaileh
amersabaileh@yahoo.com